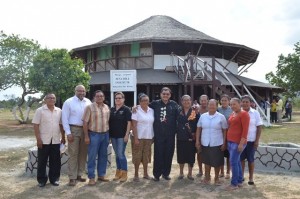 The Canada-headquartered oil exploration company, CGX Energy, has plugged US$5,000 into a plan to reprint the Makushi Language book, Makushipe Komanto Seru, and has pledged to raise the remaining US$10,000 from other businesses to ensure that copies are available in time for Guyana’s jubilee celebrations in May, 2016.

The Government Information Agency quoted  Chairman of the CGX Board of Directors, Dr. Suresh Narine the company is honouring its corporate social responsibility by donating the money to commence the reprinting of the Indigenous language book.

“Our corporate social responsibility at CGX is informed by social needs, and it is not something we do just to look good, but rather, we seek ways of nucleating positive sustainable social change,” Dr. Narine stated.

Authorities intend to distribute copies to tourists and other persons during the 50th Independence Anniversary celebrations.

This disclosure was made a meeting held with Minister of Indigenous Peoples’ Affairs Sydney Allicock and senior officials of the Ministry, members of the Makushi Research Unit, students, teachers and officials of the Bina Hill Institute, North Rupununi, Region Nine on Thursday.

During his address to the gathering, Dr. Narine explained that the work of the Makushi Research Unit is critically important to the preservation of the indigenous culture, and “the ideas, concepts, descriptions and relationships that form knowledge systems are dependent on the language used to formulate the system of knowledge; when we lose, therefore, the language, we lose the knowledge, and we must not let this happen in the case of Guyana’s indigenous peoples,” he stated.

“I know you need US$15,000, we are putting in the first US$5,000 today, and I am committing to you to raising the next US$10,000 from partners in the private sector. We have to ensure that this book is printed by May 26, in time for our Jubilee celebrations,” Dr. Narine said.

Coordinator of the Makushi Research Unit, Paulette Allicock, expressed satisfaction and thanked Dr. Narine and CGX for the donation.

Meanwhile, Minister Allicock as well expressed gratitude to CGX for the contribution, adding that the unit’s endeavours are important as it advances the process of collection of information on plants and tries to break new grounds on intellectual property rights.

“We have been talking about it, but has never been able to move forward, now we can move forward in partnership with others,” Minister Allicock explained.

With regard the revival of the language, the Minister said that teachers would be needed to implement this programme and, “we are looking to the Makushi Research Unit to mobilise and coordinate this.”

President David Granger at the launch of Indigenous Affairs Month last September, had committed his Government to the revival of the indigenous languages.  President Granger said that the rich and diverse cultural heritage of Indigenous peoples needs to be safeguarded, even as modernisation and penetration by other cultures are threatening many of the traditions and values.

There are nine Indigenous languages; Arawak (Lokono), Akawaio, Arekuna, Carib (Karina), Makushi, Patamona, Wapishana, Wai Wai and Warau. However, to date, dictionaries have only been produced for seven of the nine, leaving the Carib (Karina) and the Patamona languages still to be completed