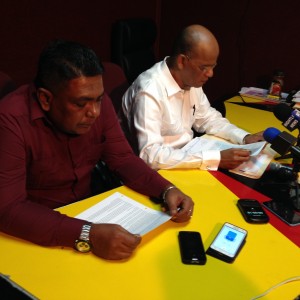 The People’s Progressive Party Civic (PPPC) on Thursday denied abusing state resources for electioneering purposes, even as it leveled a similar charge against the 10-month old coalition administration ahead of next week’s Local Government Elections.

“I could say one thing that when we were in government- and I was involved in a lot of these arrangements- normally we pay for our transportation, especially in the interior when we send people I normally ensure that we pay, the funds come from Freedom House and we pay for these things,”  PPP parliamentarian and organiser, Zulficar Mustapha told a news conference.

After expressing concern that sections of the media were echoing questions by the opposition about why or whether the PPP did take certain actions while it was in government from 1992 to 2015, the party’s General Secretary denied that State resources had been abused for election purpose. “Never, we raised funds through fund-raising exercises. We raised funds through fund-raising exercises and we used that money to conduct our campaign,”

The Party General Secretary claimed that 17 government ministers- and in a number of instances President David Granger- have been flying into Anna Regina and several interior locations such as Mabaruma, Bartica and Lethem.

Guyanese are expected to vote in Local Government  Elections – the first in 23 years- on March 18, 2016.