Chris Ram shortly after the first day of the CoI concluded

President of the Guyana Bar Association (GBA) Chris Ram has raised some concerns about the manner in which the Commission of Inquiry into the Camp Street riots is proceeding.

The GBA President speaking to members of the media after the hearing said that he was present in his personal capacity and was “very concerned about it [the CoI].” 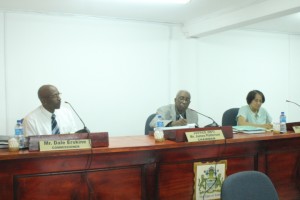 He indicated too there were other concerns pointing out that  some of the questions were leading questions “that ought not to have been framed the way they were framed so I am pretty concerned.”

Going forward, Ram detailed that the GBA has a vested interest in the COI since the fraternity would be directly affected.

He said that there is actually a discussion whether the GBA should ask for permission to be a part of the COI.

“So that we could appear as a friend of the tribunal but with a right to ask questions and also to object to certain questions being asked,” Ram explained. (Jomo Brusheildon Paul)