Camp Street CoI: “The devil was busy that day” – Prisoner 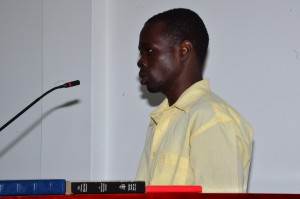 Murder accused Errol Kesney (Williams) on Thursday gave his testimony to the Commissioners of the Commission of Inquiry into the Camp Street unrest where he detailed what occurred from his point of view.

32-year-old Kesney told the Commissioners that on Friday March 3, as the prisoners were making their way out of the block; they turned back, fearful that they would have been beaten by the ranks.

He said that after this bit of confusion, a prison officer he identified as “Mr Hooligan” proceeded to lock the doors to the division.

Kesney, under cross examination stated too that it wasn’t until after they were back inside of the block that they noticed the smoke all around. At first, he couldn’t determine whether it was a fire or just smoke.

The man told the Commissioners that onto this day he can still feel the heat from the fire.

Asked what he felt went wrong that day, Kesney declared “I think the devil was busy that day” adding “ I was in a corner praying and God saved me.”(Jomo Brusheildon Paul)