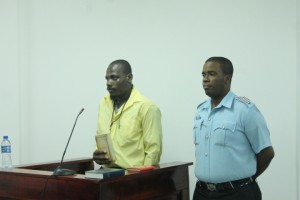 Dwayne Lewis during his testimony on Thursday

Dwayne Lewis, the first person to give testimony at the Commission of Inquiry (CoI) into the Camp Street riots says that prisoners felt a way after they were relieved of illicit items in the Camp Street jail.

Lewis told Commissioners at the Inquiry that two large buckets containing contraband were taken from the prisoners in Capital A, after a search was conducted on Wednesday.

“Two large buckets, some had cell phones in it and the other had “drugs – leaves, seeds and stems suspected to be marijuana,” said the Camp Street inmate.

He said that he did not know how his prisoners felt when their belongings were taken away “but you could see it in their face that they felt away.”

According to Lewis, the cellphones would provide a certain level of comfort to the prisoners and while the administration of the prison is obligated to give prisoners phone calls, the service “is only provided when something happens like what happened last week.”

“They have to get them cause it wouldn’t be comfortable for them to serve their prison time…It would make the prison administration calm we would not have these riots and these sort of things,” Lewis told the Commissioners under cross examination.

He was also asked how the cellphone would make its way into Lot 12 Camp Street, this question, Lewis refused to answer.

Lewis was emphatic that while cellphones are prohibited, officials do not have to seize all when they conduct their searches.

“If you come to search and you find ten cellphone at least you can take six and leave four,” he stated.

He said that while searches are done at the block every three months, there was a long hiatus before that most recent search was conducted at the prison.

“For the past five searches I saw these police officers from the Guyana Police Force would come and join in to give a hand to conduct the search,” he said.

Lewis also expressed disappointment with the manner in which the meals for prisoners was prepared. He said that sometimes, prisoners would receive food with “black pot” inside of it. (Jomo Brusheildon Paul)