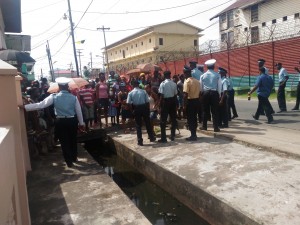 Officers holding back crowds that had gathered at the Prison

While complaints from the families of the prisoners that died in the Camp Street Prisons continue pour in, President David Granger has stated that the Government was not legally required to provide relief to the families.

The Government through the Social Protection Ministry has promised $100,000 to the families of the 17 inmates that died in the fire. This amount however has been rejected by the family members.

One of the arguments presented against the $100,000 being given to the families is that the men were in the care of the State at the time of their deaths hence the state should bear all costs associated with their burial.

Questioned on Tuesday, President Granger said that the monies were “ex gratia” meaning that the payment was done from a sense of moral obligation rather than because of any legal requirement.

“This is an ex gratia payment, it’s a one of payment to bring relief to Guyanese citizens it’s not an obligation on our part but we want to make sure that children are in no way disadvantaged by what occurred,” the President noted.

Granger went on to say that the monies should not be seen as compensation, but rather as a form of relief for those affected.

“This is not a question of compensation this is a matter of relief and we understand the tragic circumstances under which people died last week and the government is attempting to assist the widows and the children,” said the President. (Jomo Brusheildon Paul)