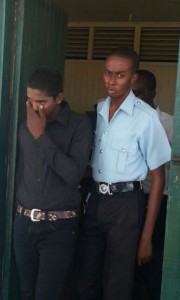 A young man who, allegedly stabbed his 18-year old girlfriend 41 times almost one year ago, was Monday arraigned for murder.

Appearing before East Coast Demerara Magistrate, Zameena Ally-Seepaul, the accused – Shivanand “Shiv” Roopnarine- was not required to plea to the indictable charge that he murdered Alicia Mc Pherson on April 19, 2015 at 612 ‘C’ Field, Sophia.

The 22-year old man was remanded to court until April 28, 2015 when he would re-appear in court for a status report.

Roopnarine , of 478 Grove Housing Scheme, East Bank Demerara, was captured on Friday, March 4, 2016 at the Mabura-Linden checkpoint by an alert policeman.

Prosecutor Sergeant Jupiter told the court that the alleged murder stemmed from a dispute over Mc Pherson’s departure in the company of another man.

During an argument, she was stabbed more than 41 times. She was later found near bathroom at the back of a yard. She was rushed to the Georgetown Public Hospital where she died.

Previous: “I will not resign at the behest of Rohee” – Ramjattan
Next: Surinamese drug mule jailed in Guyana