“I will not resign at the behest of Rohee” – Ramjattan 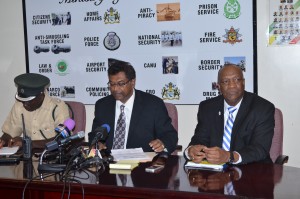 Officials at the Press Conference on Friday

Vice President and Public Security Minister Khemraj Ramjattan says that he will not resign from his Ministerial portfolio.

Rohee on Monday morning stated that “the Granger administration stands condemned. Heads must roll for this unforgiveable and unforgettably episode in the hierarchy of the Security Sector.”

Ramjattan during an interview with Demerara Waves said that Rohee should ‘haul his a**.”

Ramjattan however stated that should the President ask him to step down from his portfolio, he would be willing to do so.

The Minister has already convened a Commission of Inquiry into the riots at the Camp Street prison which left 17 prisoners dead.

The first report from that Commission is expected on March 15. (Jomo Brusheildon Paul)