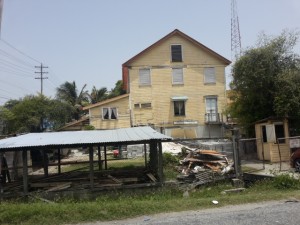 Students of the Practical Instruction Centre (PIC) will soon be taking classes and examinations in a more conducive environment, with the rehabilitation of the colonial wooden building in Kingston, Georgetown through a grant from Digicel (Guyana).

Demerara Waves Online News was told that the project is as a result of a Digicel Group competition called “Waves” that the Guyana operations won. The building is located at the corner of Cowan and Water Streets. “That project was chosen because it is practically in our backyard and passing it everyday, we saw that the building was in a deplorable state and we recognised that most of the children who  go there are from poor neighbourhoods. As you know, we are very community based and why not start within our own backyard,” the source said.  The Kingston Practical Instruction Centre is located in the same block as Digicel (Guyana) commercial operations.

Sources said rehabilitation works began in December 2015 and the first phase is expected to be completed by the end of  March ahead of  CXC Examinations.  Sources said the architectural design of the decades-old building would not be altered but provision was being made for the separation of the classes from the workshops.

In an effort to minimize the chance of a fire, the source said the workshop area is being rebuilt in concrete.

Company sources were tight-lipped about the amount of money that has been awarded for the project, but phases one and two are estimated to cost about US$75,000. That would include electrical fixtures and equipment. Permission has been granted by the Ministry of Education for the repair and internal re-modelling of the building.

“It is was in very pretty bad shape. There was no proper wiring; there were holes in the wall and the main structures such as the columns of the building- most of them were rotten due to wood ants. Toilet facilities were practically non-existent,”  the source told Demerara Waves Online News.

Previous: No evidence Lethem-based soldiers raped teenage girl
Next: After spending millions on cleaning City, drains and alleys being clogged up again