After spending millions on cleaning City, drains and alleys being clogged up again 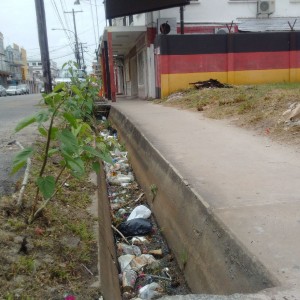 This drain on Robb and Wellington Street has not been cleaned in weeks.

After spending at least GYD$300 million on cleaning drains and alleyways in several sections of Georgetown, maintenance now appears to be a major problem.

Several areas visited shows that drains are being slowly clogged up again by plastic bags, pieces of cardboard and silt. Vegetation is again taking over many alleyways.

Demerara Waves Online News was told that the Georgetown City Council had planned to offer small contracts to groups of persons to maintain the areas every three months.

Contracts estimated at GYD$1.5 million each had been awarded during the initial cleaning of parapet drains.

Town Clerk, Royston King admitted that maintenance of the city was a major problem but sought to deflect the problem to litterbugs. “There is still a very high level of indiscipline on the part of some citizens, who notwithstanding our efforts to elevate the status of Georgetown, you still have people littering and re-littering areas that were freshly cleaned,” he said. Other major obstacles, King said, including the disposal of construction waste, improper storage of sand and stone and the blocking of some drainage facilities. 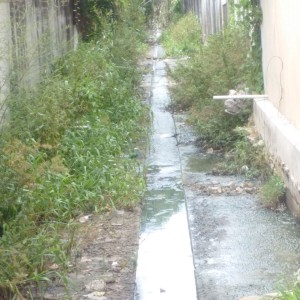 A re-vegetated alley that was recently de-silted and weeded.

Asked why maintenance workers and City Constables were not working in tandem to ensure the drains and alleyways are clean and litterbugs are caught, the Town Clerk said that was not possible because of insufficient funds to hire the workers.

Team Benschop, one of the groups contesting the March 18 Local Government Elections, has highlighted the need for the Georgetown City Council to be transparent, accountable and efficient in managing the affairs of Georgetown.

Mark Benschop has promised that if his group wins the majority of council seats, there would be a sustained maintenance and solid waste management programme for the city instead of just spending huge sums on one-off cleaning exercises. “We believe that it will work as a way to employ various communities across the city. We believe that it’s going to save taxpayers’ monies instead of what we often times see or we are accustomed to – millions of dollars being pumped into the city for a particular period of time and once that is done, that’s the end of it,” he said. 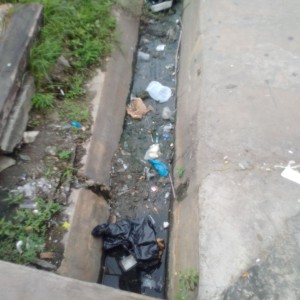 Garbage and silt reclaiming one of the drains on Regent Street. 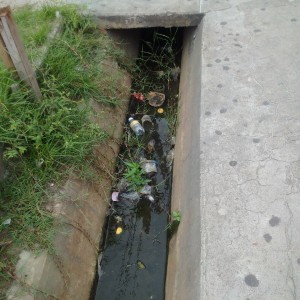 Team Benschop also announced plans to have a waste-recycling plant and involve City Constables more  as part of efforts to create a cleaner and safer Georgetown.