Parents of newly-trained police urged to be gatekeepers ; service bigger than small salaries 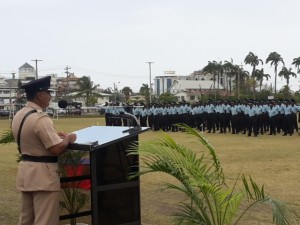 Parents of 295 newly-trained members of the Guyana Police Force were Monday urged to inform the law enforcement agency if they suspect that their children are following bad company.

Delivering brief remarks at the passing out parade, Assistant Commissioner of Police (Training), Paul Williams said doing so would help ensure that the policemen and women do not bring themselves into disrepute. “Please ensure that you make that observation, still in the light of parents, to observe their behaviour and association.

If their attitude still reflects negatively or the person with whom they have associated with becomes a questionable character, be free to make it known to us so that we will be able to being them, talk with them and guide them before we lose them after spending so much quality time,” he told the recruits at the Guyana Police Force’s Sports Club Ground.

Williams appealed to parents and guardians to ensure that the fresh batch of GPF members remain committed and punctual as part of efforts to ensure that they discharge their duties in a polite, flexible, friendly and firm manner.

Assistant Commissioner of Police, David Ramnarine urged the  constables to recognise the importance of serving well in a “noble and glorious profession” that is more rewarding than higher salaries. “The salary may be small but it is also service and serving well and if you serve well, that is bigger than the small salary that you receive because that is invaluable because you’ll be serving humanity which is the highest calling in any order in this world,” he said.

Ramnarine suggested strongly to the new GPF members that they should resist temptations to engage in corrupt practices. “I urge you to learn to live within your salary. Be patient and humble and strive to set a good example,” he said.

With an average starting salary of less than GYD$100,000 net, Guyanese police are often accused of taking bribes in exchange for not pursuing traffic, drugs and other offences.