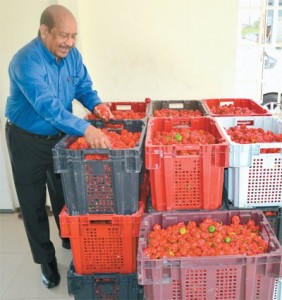 (TRINIDAD GUARDIAN).- Guyana is looking at T&T’s model of hot pepper production and the sharing of production of marketing information and exchange facilities by Caroni Green Limited (CGL) and personnel from the Agriculture Committee of the Private Sector Commission (PSC) of Guyana.

This follows a visit by Beni Sankar, chairman of the PSC’s Agriculture Committee, who visited CGL’s Mon Jaloux farm in Cunupia last week. CGL CEO Sharma Lalla told the T&T Guardian Sankar was impressed with what he saw.

“Mr Sankar expressed a strong desire to deepen the relationship between CGL and agriculture stakeholders in Guyana,” said Lalla.

He noted that the farm model developed and implemented by CGL was worthy of replication and the foreign exchange earning potential of the venture is a desirable outcome for his country.”

Lalla said CGL exported just over US$100,000 worth of hot peppers to the United States market in the last quarter of 2015. He said Sankar see potential in integrated agriculture which can be profitable and provide sustainable income for farmers.

“He also spoke of initiatives in Guyana to provide persons with 25-acre parcels of land to stimulate the agricultural sector,” he said.

Lalla said CGL has achieved a great degree of success with its hot pepper production and export marketing and plans to expand its range of crops with continued focus on the export sector with its associated benefit of generating foreign exchange.

He said Sankar’s visit was in furtherance of the terms of reference and mandate of the PSC’s Agriculture Committee for mobilisation of Guyana’s private sector to play more of a role in agriculture development including non-traditional crops, livestock and aquaculture. He said the intent is to engage all stakeholders in a way that could assist T&T and Guyana in realising their full agricultural potential with the objective of improving food security in the region.

Sankar is CEO of the Kayman Sankar Group of Companies in Guyana, one of that country’s most successful rice farming and milling companies. He has also served as chairman of the Caribbean Rice Association and president of the National Aquaculture Association of Guyana (NAAG).

His visit was arranged by Liaquat Ali, president of the Couva Point Lisas Chamber of Commerce.