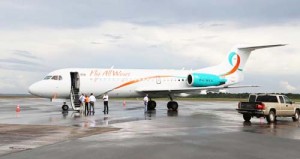 The Guyana government is poised to grant permission to Fly Allways to operate scheduled flights to Guyana with connections to Brazil and the Caribbean, a top aviation regulator said.

“We have received an application from Fly
Allways and we have processed that application and we have made a favourable recommendation to our subject minister to take to Cabinet,” the official of the Guyana Civil Aviation Authority (GCAA) told Demerara Waves Online News.

Very strong indications are that Cabinet will give the Suriname-based airline the green light to begin flights to Guyana.

The GCAA official said the airline would be flying Suriname- Guyana-Barbados and Suriname-Guyana-Boa Vista (Brazil).

Asked whether the airline would be flying to Dutch Sint Maarten, the GCAA representative said Fly Allways has not applied to serve that route but indications are that it may do so in the not too distant future. “They have quite a few Caribbean destinations that they would like to fly to. Suriname is one of them but they have not applied for that as yet,” the official said.

Fly Allways, whose top executives have been drawn from another Suriname-based carrier-Blue Wings- will be flying Fokker planes on the approved routes.

Tagged with: Fly All Ways