UN to send another border fact-finding mission to Guyana 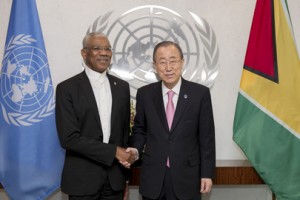 Guyana remains optimistic that United Nations Secretary General, Ban Ki Moon will refer the border controversy with Venezuela for a juridical settlement, even as he prepares to dispatch another fact-fining mission to Georgetown.

Foreign Affairs Minister, Carl Greenidge said a United Nations team would shortly visit Georgetown and Caracas. “The SG will at some point in the near future send another team,” he said.

A UN team had visited Guyana in October, 2015 and held talks with several government, opposition and other stakeholders. Prior to those talks, in September, 2015 Granger, the UN Secretary General and Venezuela’s President, Nicolas Maduro had met in New York on the margins of the UN General Assembly. There, they brokered the restoration of full diplomatic ties.

Asked whether, based on the trend so far in the deliberations with the UN Secretary General, he was optimistic that the controversy would be referred for a juridical settlement, Greenidge said “I am optimistic that that will happen.” “There is a plan and we have been reasonably satisfied with the UN’s management of the plan at this point,” he said.

Following the talks with Ban, a number of UN Under Secretaries General and the Secretary General responsible for legal affairs, the Guyanese Foreign Minister indicated that the UN Secretary General was obliged to seek a resolution to the controversy. “Things, as you know, are in the UN Secretary General’s hands but what is obvious and what we have been saying all the time is that if the UN is to stay faithful to its mandate, a referral to the ICJ (International Court of Justice) must be made in the not too distant future,” he said.

Venezuela did not participate in Friday’s talks.

The Ministry of the Presidency later issued a statement, saying that the talks between President Granger and the UN Secretary General were to update the latter on the situation in regards the controversy with Venezuela and to listen to what the Secretary General had to say concerning his attempts to resolve this issue.

The President restated to the Head of the UN that Guyana always believed that what was at issue in this controversy was legal in character and had to be settled by a legal process. The Head of State reasserted Guyana’s choice of a ‘juridical settlement’ and asked, once again, that Venezuela’s legal contention that the 1899 Arbitral Award is null and void be taken to the International Court of Justice (ICJ) for resolution.

The President pointed out that the failure to resolve this controversy places Guyana at risk.  The Secretary General was reminded that in October 2013, Venezuela sent a naval corvette into Guyana’s waters to expel a petroleum exploration vessel. Venezuela, again, in October 2015 wrote to a Canadian gold mining corporation in Guyana threatening legal action for alleged trespass on Guyana’s territory, which claimed by Venezuela.

The 50th anniversary of the Geneva Agreement was observed on February 17 last. His Excellency told the Secretary General that Guyana has lived with the promise that this Agreement would have brought an end to the territorial controversy and that the Guyanese people could enjoy the benefits of Independence.

The President used the opportunity to express his gratitude to the Secretary General for his engagement in exploring means of resolving this controversy and for keeping his promise to find a way forward. President Granger reiterated that Guyana has always cooperated with the representatives of the Secretary General, who were engaged in meeting with both sides.