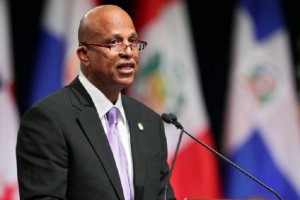 Prime Minister of Belize and Chairman of the Conference of the CARICOM Heads of Government Dean Barrow on Wednesday announced a series of actions that CARICOM Member States will take to confront the Zika virus that is affecting the Region.

The course of action includes continuous public education, implementation of measures at ports of entry, health facilities, schools, private enterprises (such as hotels and tourism facilities), factories and other businesses. He said entities would be encouraged to do whatever was necessary, including fogging to render them free of aedes egypti breeding.

The Chairman outlined that governments were being asked to reduce import tax on essential public health supplies such as insecticide-treated bed nets and insect repellent for the duration of the epidemic in the Region which they estimated would be approximately two years.

Prime Minister Barrow also announced that the second week of May would be designated as ‘Caribbean Mosquito Awareness Week’.

“We have asked CARPHA and the CARICOM Secretariat to report to the Council for Human and Social Development (COHSOD) on health, which is an organ of the Community on the effectiveness of the course of action we’ve agreed, so there will be continuous monitoring and reporting,” the Chairman was quoted in a statement issued Thursday by the Guyana -based CARICOM Headquarters.

The announcements were made at a press conference on Wednesday afternoon at the conclusion of the Twenty-seventh Intersessional Meeting of the Conference of Heads of Government of CARICOM in Placencia, Belize, that was held from 16-17 February 2016.

Zika is a disease caused by the Zika virus that is spread to people primarily through the bite of an infected Aedes species mosquito. The most common symptoms of Zika are fever, rash, joint pain, and conjunctivitis (red eyes). The illness is usually mild with symptoms lasting for several days to a week. People usually don’t get sick enough to go to the hospital, and they very rarely die of Zika. However, there have been reports of a serious birth defect of the brain called microcephaly (a condition in which a baby’s head is smaller than expected when compared to babies of the same sex and age) and other poor pregnancy outcomes in babies of mothers who were infected with Zika virus while pregnant.

On 22 January 2016, the Centers for Disease Control and prevention (CDC) activated its Emergency Operations Center (EOC) to respond to outbreaks of Zika in the Americas. On 1 February 2016 the World Health Organisation declared a Public Health Emergency of International Concern (PHEIC) because of microcephaly and other neurological disorders in some areas affected by Zika. On 8 February 2016 the CDC elevated its EOC to a level 1, the highest level.