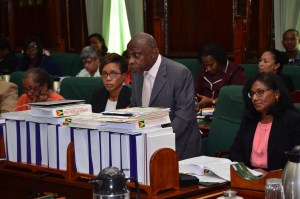 The Government of Guyana has set aside a total of $200M that will be used as legal fees to defend Guyana against the continued aggression from Venezuela in the current border controversy.

This was revealed by Foreign Affairs Minister Carl Greenidge under scrutiny from Opposition Chief Whip Gail Teixeira as the Ministry of Foreign Affairs budget was scrutinized on Thursday.

According to Greenidge, the $200M Budgeted under “Other” in the Ministry’s budget will be used as monies to pay legal representatives if the case between Guyana and Venezuela goes to the International Court of Justice (ICJ).

Government has previously adumbrated that it would prefer a juridical settlement in the Guyana/Venezuela border controversy.

In 2015, the Vice President said that Guyana has two options when it approaches the ICJ, one of which would be for the court to make a decision on the substantive issue and the other for the court to offer an opinion.

Guyana intends to seek the opinion of the court on the 1899 Arbitral Award, which Venezuela for the past 50 years has claimed is invalid. Should the ICJ make a decision in favour of the award, that decision would be definitive, Greenidge explained.

The options available have all been tried…under one name or another and they have all been found wanting…at the end of the exercise, they left Guyana at a disadvantage,” said the Vice President later adding “Venezuela has been arguing that the 1899 award is null and void; for an award to be deemed null and void it has to be a process of law.”

The Foreign Affairs Minister made it clear that any definitive solution to the problem would include answering the question of whether the award was null and void.

“Unless that contention is withdrawn…all the things that the UN might do will not help one iota,” Greenidge emphasized.