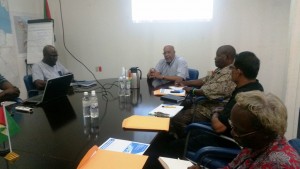 The Guyana Water Incorporated (GWI) is alarmed at the amount of medical waste, including syringes and needles, that its workers are coming into contact with while maintaining Georgetown’s sewage system

“Our sanitation employees are alarmed by the amount of medical waste found in the GWI sewage tanker as well as sewage chambers outside of some hospitals,”  GWI Chief Executive Officer, Dr. Van West-Charles told representatives of the several hospitals who were summoned to a meeting last Friday to discuss the situation.

“The health and safety of our employees cannot be compromised in any way, hence the reason for the meeting with all the hospitals; we must find a swift solution to this problem and protect the health of GWI’s sanitation employees,” he was quoted as saying in a statement.

“The purpose of the meeting was to discuss the disposal of medical waste following complaints by GWI sanitation employees about coming into contact with needles, syringes, discarded medical bandages and other forms of medical waste while executing their duties,” said GWI.

The GWI Chief Executive explained that he recently met with all the employees of the Sanitation Department who described several alarming instances in which medical waste was discovered while cleaning sewage blockages or clearing overflows at various medical institutions within Georgetown.  Another instance included a sanitation employee stepping on used needles while attempting to clean the GWI sewerage tanker.

The GWI Chief Executive further stated that he was prepared to take the conversation to a larger public forum in order to garner immediate action.  “The management of GWI cannot accept that our sanitation workers are coming into contact with used needles on a regular basis,’ stated Dr. Van West-Charles,  “this issue is of paramount importance since it directly affects the lives of our employees and their families.”

Dr. Van West-Charles urged all the representatives present to examine if there are breaches in adhering to guidelines which stipulate how to correctly dispose of medical waste and take corrective action.

The Chief Executive also indicated that he will be engaging the Chief Medical Officer (CMO) on the matter and more discussions will be held to resolve the issue.

More than 10 years ago, the United States Agency for International Development (USAID) had supported a safer injection project that had focussed on, among other things, the globally accepted best practices for the safe disposal of needles and syringes.