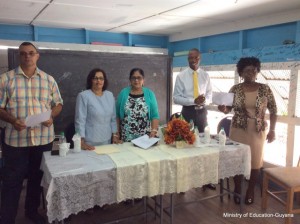 The Ministry of Education has embarked on a series of suicide awareness sessions in Georgetown under the theme “Choose Life- Say No to Suicide,” as Guyana continues to reel from a high incidence of persons taking their own lives.

Mrs. Nagamootoo highlighted some of the many causes of suicide such as stress, abuse, drug addiction, pressures at school and hurt from broken relationships. She further elaborated that love is very important.

Meanwhile, PastorWilliams told the students that they have a purpose in life and on the road to accomplishing their purpose they might encounter a few challenges/ obstacles. However, he added that they should never give up; they need to persevere in order toaccomplish that which God would have created them to accomplish. He implored the students to keep their eyes on the prize and remain focus to achieve their goals. Additionally, Mrs. Vyphius in her discourse indicated the importance of making the right choices and the fact that suicide is not the answer.

Kirk Jardine ‘Chow Pow’,shared his personal battle with stress . He told the children that due to life’s challenges and difficulties he started abusing drugs at 8 years old. He continued by sharing that as a result of his addiction, he attempted suicide by cutting his wrist and drinking kerosene. He further recalled that at age 31 he entered rehabilitation and after interacting with counsellors, he realized that his life was spared because he had a purpose.

Dr. Latchmin shared how chemical imbalances in the brain can drive someone to committing suicide. She added that it is necessary to have positive thoughts since it will contribute to a positive outlook on life.

The session was chaired by Ms. Onika Pearson, Senior Schools Welfare Officer who shared some ways to cope with suicidal thoughts and addressed misconceptions about suicide.

The session ended with teachers, students and all present, singing the famous song “Lean on Me” as a reminder that there are persons available to call on in time of need.