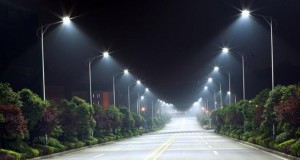 Sparks flew in Guyana’s National Assembly over whether government was providing street lights equally to communities across Guyana.

Though the opposition People’s Progressive Party Civic (PPPC) parliamentarians did not bring the issue of partisan race-based politics into the discourse, it was clear that the communities from which street lights have been removed are that party’s stronghold while the other one is a solid voting block for the governing coalition of A Partnership for National Unity and the Alliance For Change.

PPPC front-bencher, Priya Manickchand asked Minister of Public Infrastructure, David Patterson about whether he believed that it was “equitable” to place lights in communities such as Linden that never had lights and were being paid for by government before while removing street lights from the West Berbice communities such as Bath, Bush Lot and Cotton Tree that were erected there by residents.

Responding, Patterson noted that there are 56 lamps at Woodley Park and Bath and the lights at Linden are on the main road. He assured that the installation of street lights is being done fairly. “I do that fairly and equitably and transparently,” he said

Under intense questioning by PPPC parliamentarian, Nigel Dharamlall, the Public Infrastructure Minister said government would not tolerate the illegal installation of street lamps that consume GPL’s electricity free of cost. 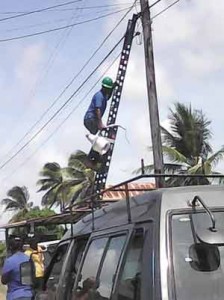 A street light being removed from a utility pole in a Berbice village. (Kaieteur News photo)

He noted that his ministry was paying for 48 lights in Bath and Woodley Park.

Asked by the PPPC’s Nigel Dharamlall why the lights at Bath, Bush Lot and Cotton Tree were removed and when they would be replaced, the minister said “if anyone connects to the power of GPL without paying, it is (an) illegal connection.”

The Public Infrastructure Minister said there must be a 10 percent reserve.