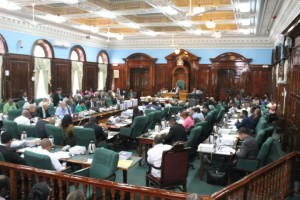 A sitting of the National Assembly

The APNU+AFC administration has declared that there will be no more slush funds and monies will not be handed out to persons in any flippant manner.

This declaration was made by Junior Education Minister Nicolette Henry who as at the time making specific reference to issues at the former Culture Youth and Sport Ministry.

She indicated that in 2014, more than $300M was allocated for the ground enhancement through the Ministry, but in 2016, that amount has been halved.

The Minister stated that the ground enhancement programme lacked oversight, measurable outcomes, strategic direction and did not deliver to its intended targets.

“I am happy to report to this Honorable house that the slush fund days are over,” said Henry later adding “no longer will $1M be given in a flippant manner without a clear understanding of what and how it will be used for community development,” said Henry.

She advised that the APNU+AFC plans to implement a phased approach to ensure that all the grounds funded under the project meet the minimum requirements of being “functional community grounds.”

“The days of fragmented and piecemeal approaches are behind us,” she declared.

Also on the Minister’s radar was the Leonora Sports Complex as she described the selection of the location as madness since the majority of athletes live and train in Georgetown.

“I have heard the idiom there is a method to every madness, I am yet to see the madness in this instance.”