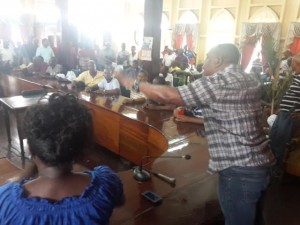 Under intense pressure from minibus operators at parks around Guyana’s capital City, the Town Clerk, Royston King announced Sunday that a maintenance fee would be reduced from GYD$200 per trip to GYD$200 per day beginning Monday.

“Who don’t want to pay will not be allowed to use the park,” he said.

He said the pilot fee deal would run for one week beginning Monday, 8th February, 2016 after which there would be another meeting with bus operators to ascertain whether it is working satisfactorily.

King made the decision to a packed City Hall Chamber of minibus drivers, conductors and even touts after listening to many of them oppose the per trip payment scheme. A number of bus drivers suggested that police remove touts from bus parks who they have to pay an average of GYD$60 per trip or GYD$300 per day, money they said could be paid to the city instead.

Some minibus operators also pay touts the equivalent of one fare per trip to load their vehicles.

With the new deal struck, the Town Clerk announced that the Traffic Management Unity of the City Constabulary would ensure that drivers load their buses by turns rather than breach the line. “We will enforce our laws here and nobody will be allowed to use the hot-plate and everybody will have to comply with the law

One driver told the meeting that he would refuse to pay the maintenance fee which comes into effect on Monday and instead planned to challenge the new charge in court.  The driver, who plies Lodge Route 46 explained that after earning GYD$14,000 between 6  AM and 9 PM, he spends GYD$8,000 in fuel, pays the owner GYD$5,000 he could not pay GYD$200 per trip for an estimated 20 trips without losing his wife. “I am going home to mind my wife and children with $1,000. Next thing you know, another man gone with my wife,” he said to loud approval. He argued that some of the monies being paid annually for licenses should be allocated to the Georgetown Municipality for maintenance works instead of further burdening Guyanese. “It is already tough and getting more tough. We were being treated like dogs under the past administration, now like you all want to make us into slaves,” he said.

The Town Clerk later told Demerara Waves Online News said the monies garnered from the maintenance fee would be used to ensure that there is order at the minibus parks including the provision of garbage receptacles and the installation of poles and chains to ensure that buses join and remain in a line, security, lights and road markings. “We believe that it is only fair for those who are benefitting from these facilities to make a contribution not only for the installation of such facilities but also to help us to maintain these facilities,” he said.

King said charging the maintenance fee was approved by Councillors and receipts would be issued.

The Town Clerk could not  immediately say how much the maintenance programme would cost and said City Councillor decided on a rate as the minimum charge which would still have to be subsidized.