LGE is for everyone – President defends big parties contesting 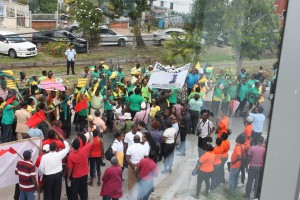 Supporters and candidates of APNU+AFC and PPPC outside GECOM’s office on Nomination Day.

Against the backdrop of numerous comments that the APNU+AFC and People’s Progressive Party (PPP) should not contest Local Government Elections (LGE), President David Granger has defended the coalition’s decision to contest saying LGE is for everyone.

He said that the APNU+AFC coalition has individuals who are capable and interested in managing their own local democracies and that opportunity should be afforded to them to contest the polls slated for 18th March, 2016.

“Well its open anyone can contest…as far as APNU+AFC is concerned we have not discouraged small groups from participating…It does not discriminate against individuals or small groups,” adding “I don’t see why not. I think that the APNU+AFC contains individuals that are interested in representing a particular view on these councils, I don’t see why they should be discriminated against? Why should they be ruled out?”

On Nomination Day, several small parties had expressed concern about the big parties like APNU+AFC and the PPPC contesting the polls because the elections are about communities managing themselves. But People’s National Congress Reform General Secretary, Oscar Clarke has said that experience would be needed to support the younger politicians.

Meanwhile, President Granger expressed some sense of pride with the new government holding LGE less than a year after it attained office. A year ago, Granger was protesting on the streets outside of the former Office of the President for the then government to name a date for LGE.

“We feel is it not something that is ornamental, it is fundamental to democracy,” he stated adding “this is not just a fulfillment of an elections promise but it is a democratic imperative that people in this country to run their own affairs.”

The President expressed the view that there was no lack of enthusiasm on the part of the electorate but rather a sense of ignorance since most persons have not voted in local polls before. The last time Guyana had local government polls was in 1994.

For the first time, the elections are being held under a mixed system of proportional representation and first past the post/constituency system.