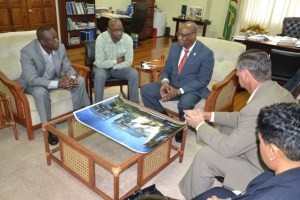 Natural Resources Minister and Government Spokesperson Raphael Trotman has affirmed that the government has not given any commitments to an Orlando Architecture firm for the design of a new sports complex.

This is against the backdrop of reports in international media that the company will be responsible for the design of multimillion dollar complex in Georgetown.

Baker Barrios Architects, Inc. said it was in the final rounds of designing the future home of the Guyana Sports Complex.

“The master plan creates a true destination and an exciting experience for visitors, spectators and athletes, while establishing a framework for sustainable legacy development,” said Tim Baker, Principal of Baker Barrios Architects, Inc. “This expansion project will provide a central hub for athletics while offering world-class amenities for fans and state-of-the-art resources and spaces for athletes to study, train, and live.

Quizzed by Demerara Waves on Wednesday Trotman was pellucid that no commitments were made to the company nor Bunbury on the issue.

“I am not aware of any commmittments given by the government,” Trotman stated later adding that the government has endeavoured to lend its support in whatever way it can in this arena.