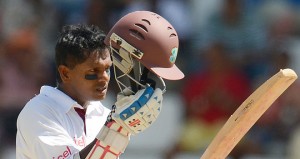 Despite being him ‘forced’ to retire by the West Indies Cricket Board (WICB), the government of Guyana says it is exploring ways to honor a great son of the soil – Shivnarine Chanderpaul.

This announcement was made by Natural Resources Minister Raphael Trotman at a press conference on Wednesday.

According to Trotman, Cabinet has mandated Education and Sport Minister Rupert Roopnaraine to conduct a review of Chanderpaul’s achievements. “Minister of Education has been asked to do a review of his achievements and to see in what other ways the government of Guyana can recognize this inspirational son and hopefully that recognition will come in May during our 50th anniversary celebrations,” said Trotman.

Already Chanderpaul has a street named after him and has also received the Cacique Crown of Honour, Guyana’s third highest national award.

He said government is looking at “what other ways the Government of Guyana can honour this outstanding son of the soil”  to coincide with Guyana severing ties with its former colonial power, Great Britain, on 26th May, 1966.

Chanderpaul, who is now playing in the Masters Champions League, said he has already informed the Guyana Cricket Board that he is available to play for his home country. He hails from Unity Village, East Coast Demerara-the same home village as former President Bharrat Jagdeo.

According to ESPN Chanderpaul retired as the second-highest West Indian Test run-maker, 86 runs short of Brian Lara: Lara got 11,953 (11,912 for West Indies and the rest for the ICC World XI), while Chanderpaul scored 11,867 (all for West Indies).

At 41, Chanderpaul, had not played for West Indies since May 2015; the West Indies selectors dropped him after a weak performance during the three-Test series at home against England.

While Chanderpaul entertained hopes of a comeback, the selection panel, headed by former West Indies captain Clive Lloyd, had provided enough hints that they had moved past Chanderpaul as they ignored him for the various series in the last eight months.

Chanderpaul was also not part of the 15 players awarded annual contracts by the WICB in December.

Previous: No commitments given to Orlando Group for design of Sports Complex – Govt
Next: Drought forces water rationing in areas of Georgetown