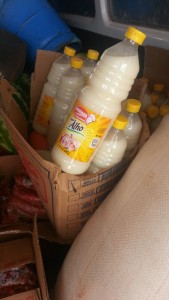 The Guyana Revenue Authority Wednesday said it seized almost GYD$20 million worth of smuggled goods and detained a number of vehicles that were used to transport the items  in January.

“The countrywide enforcement campaign has netted a quantity of frequently smuggled items with the most notable items being foreign chicken and mosquito coils which have not been approved for use in Guyana,” said GRA.

The GRA said a  number of those fingered have been identified as offenders for the first time while the others are repeat offenders and so they would have to pay a penalty of three times the value of the duties that should have been levied.

Meanwhile, the Authority said cross border trade has reduced due to the establishment of in-transit bonds in Suriname. This has resulted in the need for importers to containerize cargo, which gives more control as it relates to the importation of goods.

The Law Enforcement and Investigation Division  of the GRA says it will continue to work with the Task Force on Fuel Smuggling and Contraband in ensuring that the issue of smuggling is effectively addressed.

The GRA says effective enforcement depends on cooperation from the public in sharing information on instances of corruption and illegal activities “that are geared at depriving the state of revenue or results in unfair competition with the local manufacturing sector and legitimate importers.

Members of the public with vital information were told to contact the GRA’s Law Enforcement and Investigation Division. by calling telephone numbers 227-8222 or 227-6060, extensions 3201 – 3208.