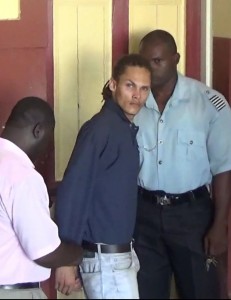 Richard James who was fined and sentenced to community service for being in possession of marijuana.

An audio-visual technician at the Guyana Marriott Hotel Georgetown was Tuesday fined GYD$20,000 and sentenced to 50 hours community service at the Georgetown City Constabulary.

Twenty-three year old Richard James of Sheriff and Enachu Streets, Campbelville pleaded guilty to being on possession of 1.4 grammes of marijuana at the Marriott Hotel, Kingston, Georgetown on 28th January, 2016.

If he does not provide the community service, he would be jailed for six m0nths.

Police Prosecutor, Deniro Jones told the court that police arrested James at about 1 AM after the narcotic was found in his left side shirt pocket. Before he was sentenced, James told the court that he did not leave the marijuana in his locker because of the Marriott Hotel’s policy and instead kept it on his person.

James begged that for leniency, saying that he did not want the matter to tarnish his reputation, more so because he has applied for a job in Chicago and the occurrence might impact adversely on his chances of being successful.