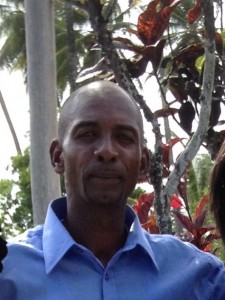 The dismembered body of a 41-year-old Mahaicony resident Curt Burke was discovered was discovered on in a clump of bushes this morning, and police suspect the man might have been a victim of a hit and run.

Reports indicate that Burke’s head and limbs were found dismembered from his body.

Police stated that investigations are ongoing and they suspect that the injuries might have been sustained as a result of a hit and run.

How residents, from the area are reporting a different story.

Burke is the first cousin of long-time supporter of the People’s National Congress Reform, Rickford Burke. Speaking with Demerara Waves Online News from his office in the United States, Burke said “My understanding is that it’s a homicide and I am in communication with the Minister of Public Security and my understanding is that the Commissioner of Police is the information and they will get back to me on that.”

One resident who spoke to Demerara Waves said that the man may have been “chopped.”

The woman reported that the man was drinking on Tuesday evening at “Jennifer Shop” with friends after which left to go home.

“He live in a dark area so I don’t know if he had any problem with anybody or so,” said the woman later adding “that is not no accident, that is chop up.”

Burke is survived by three children, the youngest of whom resided with him.