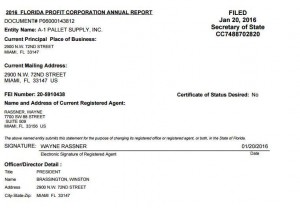 The Head of the National Industrial and Commercial Investments Limited (NICIL), Winston Brassington has taken control of a pallet-manufacturing company in Miami, Florida, according to records seen by Demerara Waves Online News.

Brassington’s taking over of A 1 Pallet Supply Inc. has come at a time when he should have been back in Guyana already from leave that he proceeded on in December, 2015.

Records show that Brassington became President of A 1 Pallet Supply Inc with effect from 20th January, 2016.  Responding to a telephone call to the company Wednesday afternoon, a lady identifying herself as Brassington’s daughter said her father was not there and she was unsure whether his Guyana number was active.

The Special Organised Crime Unit (SOCU) of the Guyana Police Force is currently probing alleged financial irregularities at NICIL, government’s holding company of state assets,  based on a forensic audit that has been ordered by the nine-month old coalition government.

Back in December 2013, Rassner- as SFNPT Vice Chairman- had met with then Minister of Natural Resources, Robert Persaud to discuss the functioning of the Protected Areas Commission, and the National Protected Areas Trust Fund.

Latest records show A 1 Pallet, which was established in 2006 and incorporated in Florida, earns less than US$500,000 and employs a staff of approximately 1 to 4.