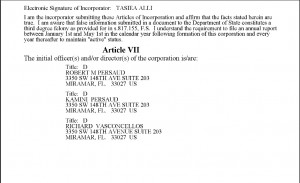 Former Minister of Natural Resources and the Environment, Robert Persaud and his wife have set up a company in Florida to “conduct any and all lawful business.”

According to incorporation records seen by Demerara Waves Online News, registration for I-Power Services Inc. was filed on February 10, 2015, three months before the May 11, 2015 general and regional elections.

Since the People’s Progressive Party Civic’s defeat at those polls, Persaud has not visited his party’s headquarters and steps have been taken to replace him and Omar Sharif on the executive of that political organisaton.

The other director of I-Power Services Inc. is Richard Vasconcellos. It was not immediately clear whether Vasconcellos who managed and supervised the Santa Fe agricultural project in Region Nine.

The Incorporator is Tasiea Alli, a Florida-based Guyanese.