Wales Estate was “economic nightmare”; Gov’t says no one will be in jeopardy 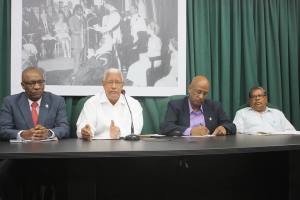 State Minister Joseph Harmon has described the situation that the Guyana Sugar Corporation (GuySuCo) was faced with as an “economic nightmare” even while assurances were being given that stakeholders would not be jeopardized.

Harmon at a post cabinet press conference on Wednesday defended the decision by GuySuCo’s management to close the estate and the Government’s support of the said plan.

The State Minister was pellucid that the decision to close did not come as a result of any of the recommendations from the recently concluded GuySuCo Commission of Inquiry.

This in fact has been a source of criticism for the Government with Opposition Leader Bharrat Jagdeo questioning the reality of the recommendations contained the COI report.

"Right now this government has moved away from the commission of Inquiry report. It has rubbished the entire report,” Jagdeo noted on Thursday.

But Harmon was adamant that it will lead to the system being more efficient and that Wales Estate “became an economic nightmare to really continue to do the things that we used to do.”

Asked whether the Government would be willing to consult with the Opposition on the issue Harmon responded in the positive but stated that any engagement must not be a political charade.

He said that thus far, government has “received no indication from the Opposition Leader or any member of the Opposition that they wanted to discuss this matter.”

Further quizzed about the possibility of a reversal of the decision, he pointed out that GuySuCo and the Agriculture Minister has made out a “compelling case” in favour of the closure of the estate.

Meanwhile Agriculture Minister Noel Holder indicated that Uitvlugt was a more modern factory and would work in favour of the cane farmers and GuySuCo.

“None of the farmers will be in jeopardy…We are trying to see if we can make internal water arrangements so it can move that way…we have one year to put a new arrangement is not happening…apart from not replanting the canes, nothing else is happening to jeopardize the people,” said Holder.

He stated that there have been industry-wide adjustments to increase efficiency and these will continue.