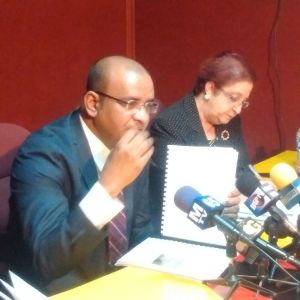 Opposition Leader Bharrat. Jagdeo Wednesday said the People’s Progressive Party Civic (PPPC)-led administration had planned to secure a US$50 minion line of credit from India to rehabilitate the sugar factories.
He pledged to help the coalition administration to get the money. “We can work with them ‎ to mobilise 50 million dollars,” he told a news conference at Freedom House, the PPP’s headquarters. :
He said the PPPC’s administration ‎had planned to use the money to also build electricity co-generation plants at each estate. In response to a question by Demerara Waves Online News on why no money was spent to rehabilitate the decrepit Wales Sugar Factory.
Agriculture Minister, Noel Holder Wednesday confirmed that the closure of the Wales Estate and Factory was not one of the recommendations by the Commission of Inquiry.
The Opposition Leader again vowed that the PPP would organise street protests if government goes ahead with its plan
to close Wales, adding that private cane farmers sold GYD$800 million in cane last year to Guysuco. ‎”Just that extraction from the economy will create untold hardships for the community there‎,” he said.
Jagdeo criticised the coalition government for closing Wales although the Commission of Inquiry had not made such. A recommendation. After he accused government of being vindictive against PPP supporters, he was asked why he thought a larger estate or factory in the major PPP stronghold of Berbice. He responded “Ibelieve they are testing the waters.”
The former President and Finance Minister said the Commission of Inquiry failed to consider the wider economic impact of the sugar industry.
Government has said that it would cost GYD$1.6 billion dollars to rehabilitate the Wales Estate and factory.

Previous: GWI urges conservation as Water conservancy dries up
Next: Wales Estate was “economic nightmare”; Gov’t says no one will be in jeopardy