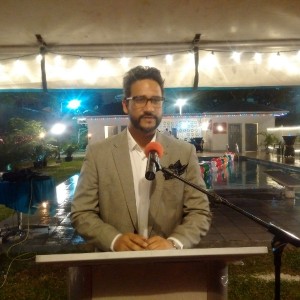 “First and foremost, Republic Bank (Guyana) Limited will be integrally involved in Guyana’s 50th Anniversary celebrations both at a national level and through our branch network with activities for our staff, customers and the communities we serve,” he said.

The Trinidad and Tobago-headquartered Republic Bank provides a range of financial services in Barbados, Cayman Islands, Grenada, Guyana, St. Lucia and Suriname as well as Ghana where it has a majority stake in  HFC Bank (Ghana).

Demerara Waves Online News was told that Republic Bank (Guyana) Limited is working closely with national planners for the anniversary whose date is May 26, 2016.

Republic Bank (Guyana) Limited  is the second major Trinidad and Tobago company to have announced its support for Guyana’s jubilee for severing ties from its colonial master, Great Britain.

The other company from that twin-island republic is Caribbean Airlines which Friday unveiled the superimposition of the Independence anniversary logo on the exterior cockpit walls of three Caribbean Airlines aircraft, via collaboration between the National Commemorative Commission and the airline.

“We have the privilege of being the national flag carrier, and ever since 2007 we have enjoyed a mutually beneficial relationship, with an average of six daily flights and carrying over 350,000 passengers annually to and from Guyana,” Caribbean Airlines’  Chairman, Phillip Marshall said.

The Managing Director of Republic Bank (Guyana) Limited also announced that in 2016, the financial institution’s “Power to Make a Difference Social Investment Programme would be extended to include environmental literacy and addressing teenage pregnancy.

Sammy said the bank would also continue its focus on youth development, strengthening Guyana’s rich cultural heritage through music and the performing and visual arts and being a voice for autism awareness in Guyana.

The bank’s vibrant staff volunteerism movement, according to Sammy, sees its staff being keenly engaged in several community initiatives.