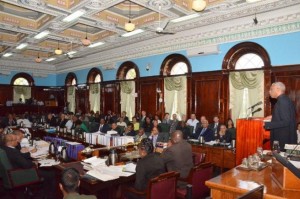 Four months after a pro-government group of rice farmers called for the establishment of a stabilisation fund, President David Granger has announced that his government would be doing so.

For years Guyana’s rice sector which is a principal export has been subjected to the volatility of the international market. This has left local farmers crying out and up in arms for government relief.

Granger during his latest address to the National Assembly announced the plan to establish the fund. “We will expand rice cultivation and establish a stabilisation fund for the export prices of rice,” the President stated.

The fund will come as part of an overall reform of several sub-sectors of Guyana’s agricultural sector.

Expounding on the stabilization fund, Agriculture Minister Noel Holder explained that it would be facilitated by the Guyana Rice Development Board (GRDB).

The Rice Producers’ Association Action Committee (RPAAC) in September 2015 had called on government to keep its election promise to set up the fund.

Leading RPACC figures are Jinnah Rahman and Turhane Doerga both of whom had endorsed the coalition in the run-up to the May 11, 2015 general and regional elections.