Mining concessions must be linked to gold declaration- Trotman 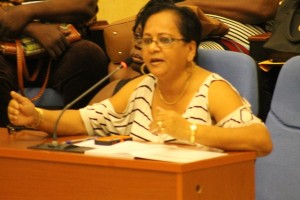 Miners would be unable to cash in on concessions for equipment unless they produce above a certain amount of the precious metal and abide by other industry rules including occupational safety and health standards, Minister of Natural Resources Raphael Trotman.

“You can’t be declaring 23 ounces of gold and ask for a concession for an excavator knowing that you made over 300 ounces. Where is the gold? Pay your royalties, we’ll give you the concessions,” he said.

Miner, Judith David, who is a former People’s National Congress Reform (PNCR) parliamentarian, said that in exchange for political support at Guyana’s May 11, 2015 general and regional elections, she believed that government should provide excavators to small miners.

David vowed to lead small miners to the government to lobby for excavators to work on lands that are yielding gold rather than those that have been already exploited by other miners. “I am not prepared to keep my dredge home for the next three months because when you find the land to give me I got to find an excavator to go to work,” she told Trotman and Junior Natural Resources Minister, Simona Broomes. 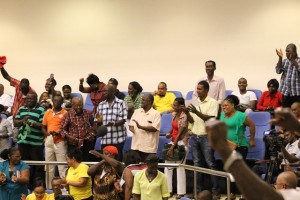 Miners cheering in response to their colleague, Judith David’s call for government to provide them with excavators because of the high risk of seizure by dealers if they default on payments due to low gold output.

In his opening remarks, Trotman announced that the Closed Areas Committee of the Guyana Geology and Mines Commission (GGMC) have been instructed to provide new yielding lands to small miners in another three months.

David noted that many miners’ excavators have been seized because they have been unable to extract sufficient gold to pay their installments to the companies although they would have already paid as much as GYD$16 to GYD$20 million.

In his closing remarks, Minister Trotman questioned whether miners were justifiably entitled to the privilege of certain concessions if they were declaring low amounts of gold, did not pay workers and engaged in poor mining and bad environmental practices. “We are not going to just grant concessions if you are not being responsible,” he said.

The Senior Natural Resources Minister also announced that the granting of fuel concessions could soon be linked to the amount of gold declared. “I will be recommending to the Minister of Finance that you tie fuel to declarations…. You have got to tie your declarations to your concessions. Too much is being lost  from smuggling,” he said.

The Guyana government earlier this week announced that at least 15,000 ounces of gold are being smuggled to other countries.  The United States is currently assisting Guyana to help successfully prosecute a Guyanese man before a local court for gold smuggling to New York.

Lydia Green, Occupational Safety and Health Officer at the Department of Labour of the Ministry of Social Protection, told the small miners that in many instances there are no accident registers, no reporting of accidents and the payment of no or low wages. “You have t be an agent of change in this industry that we are looking to regularize,” she said.