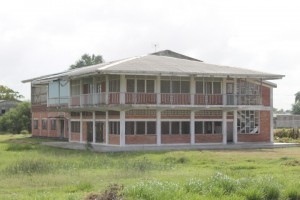 Government has so far doled out GYD$7 million to help rehabilitate the Sports Complex of the Guyana Public Service Union (GPSU) that has fallen into a state of disrepair for more than 10 years now, but union boss Patrick Yarde has suggested that there are no strings attached.

Questioned by Demerara Waves Online News at a recent news conference, Yarde shrugged suggestions that the GPSU was being politically favoured by the coalition government in pretty much the same manner as the Guyana Agricultural and General Workers Union (GAWU) was by the People’s Progressive Party Civic administration. “PSU would never be a company union and whatever support we get, it must be clearly recognised that it is merited and it is in the interest of membership development and national development,” he said.

Yarde said the union was ready to discuss with the coalition government ways in which the public service could be improved so that they could offer a better service and in turn be properly paid. “We don’t want loose favours because the government’s money is the taxpayers’ money,” he said.

Latest available estimates show that it will cost at least GYD$30 million to rehabilitate the wooden and concrete structure. The poorly secured structure appeared to have been vandalized over the years.

The GPSU President said estimates for grading the sports ground and re-wiring the building at Thomas Road, Thomas Lands have been received.

Yarde expects government to provide more financial support next year and beyond to assist with the rehabilitation of the Sports Complex. Asked where the union would be finding money to assist with the makeover of the Sports Complex, he said already the membership has been “rapidly growing” due to greater confidence and reduced fear of victimisation by public sector workers since the PPPC was voted out of office. He added that the union would be saving monies because it would no longer be spending hefty sums on legal fees to fight cases for public servants.

Asked why the GPSU allowed the Sports Complex  to “fall to pieces” over the years,  Yarde blamed the PPPC administration. “You know what this union experienced and the demons and the culprits expected the union to fall to pieces but we here,” he said, adding that the previous administration had reduced the number of permanent pensionable employees but were placed on contract.

He stressed the need for government to help public servants to have their own recreational spaces like police, soldiers and sugar estates. “That has been a representation we have been making for equal treatment…public servants need recreational facilities,” said Yarde.