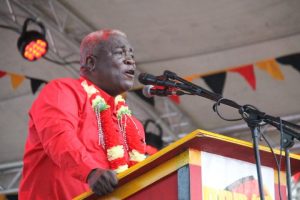 Former Chief of Staff of the Guyana Defence Force (GDF), Retired Brigadier Mark Phillips on Sunday night promised police and soldiers that they would once again get their one-month tax-free bonus salary and a well-equipped police force to fight crime if the People’s Progressive Party Civic (PPPC) wins the March general elections.

“We will return the payment of bonus to our joint services and review the pay and allowances for those hardworking members,” the PPPC prime ministerial candidate told a large rally at Albion, Corentyne, Berbice.

At his second such political outing since his party launched its campaign at the Kitty Market Square, Georgetown, Phillips said a new PPPC administration would address the conditions of work including welfare and quality of life issues of the members of the police force.

“Comrades, you in the disciplined services, many of you from Berbice, you are assured of a friend in me and a friend of the new PPPC government,” he said. He added that a PPPC administration would equip the Guyana Police Force, Guyana Defence Force, Guyana Prison Service, and Guyana Fire Service to do their jobs better.

Targeting his message specifically at crime-weary Berbicians, Phillips said, “people of Berbice, you deserve to enjoy a peaceful night’s rest and enjoy the fruits of your labour.” “The criminal situation is out of control and the PPPC has heard your cries for safety,” he said.

Finance Minister, Winston Jordan on January 8 told a campaign meeting in Lodge, Georgetown, that salary increases are far more valuable in the long term than bonuses. “Forget the promises about bonus…When you think they are giving you bonus, they are robbing you of your salary increase. Bonus is one-off, salary increase is permanent and salary increase helps you improve your pension when you are retiring…Bonus don’t count,” he said.

Jordan also announced that a package of allowances would be put in place for members of the joint services in 2020.