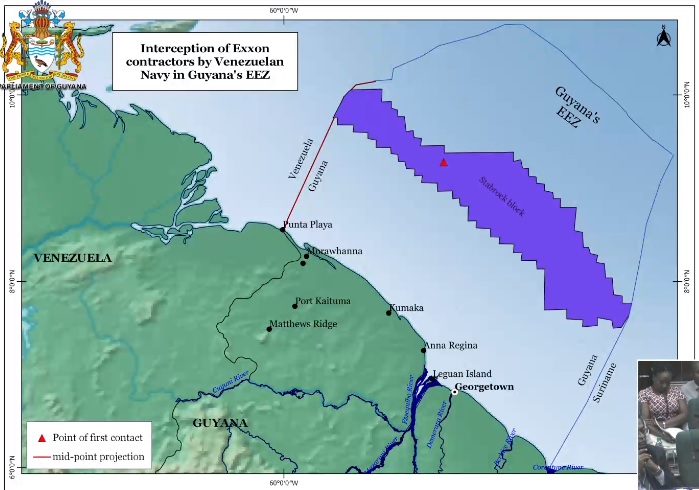 Even as Guyana awaits the United Nations General Assembly’s consideration of a complaint about Venezuela’s latest military aggression against an oil company exploring for oil offshore the Essequibo Coast, Foreign Minister Carl Greenidge said protection would be vital for the return of the ExxonMobil-hired seismic research vessel.

“We have to try and ensure that they can secure some guarantee or protection,” he told Demerara Waves Online News. Asked how would this be done, the Foreign Minister added that Guyana has in the first instance taken its case to the UN General Assembly.

He said the General Assembly would discuss the issue and possibly pass a Resolution, and it could possibly be taken to the Security Council. “To draw it to the General Assembly’s attention the use of force to resolve a matter and the fabrication of an incident, fabricated in the sense that the ships never went into the Orinoco. The coordinates they gave us have nothing to do with the Orinoco and this is a serious matter that you fabricate the location of an event,” said Greenidge, an experienced diplomat and economist.

“This is a matter that could be taken up by the Security Council once it is threatening a breach of the peace,” said Greenidge, fresh from the January 1, 2019 talks with senior director of the United States National Security Council’s Western Hemisphere Affairs, Mauricio Claver-Carone on the Venezuela Navy’s recent interception of the ExxonMobil contracted vessel.

The Guyanese Foreign Minister declined to say whether ExxonMobil has decided to resume seismic data collection ever since the Venezuelan Navy intercepted The Bahamas-flagged Norwegian seismic research vessel, Ramform Tethys, on December 22, 2018 at a location that both Guyana and Venezuela claim as theirs.

Greenidge called a “reckless attempt” efforts by the Venezuelan Navy to land a helicopter on the deck” of the vessel that was in Guyana’s Exclusive Economic Zone (EEZ) and continental shelf at an approximate distance of 140 kilometres from the nearest point to the provisional equidistant line with Venezuela and some 250 kilometres from Punta Playa, the westernmost point on the land border of Guyana.

In a statement that was also endorsed by the opposition People’s Progressive Party (PPP), Guyana also called on Venezuela to withdraw the unilateral extension of its maritime boundary to take in all the waters of Guyana’s EEZ off the Essequibo Region.

“For these reasons, Guyana calls on its sister republic to: immediately withdraw its unilateral decree, cease all uses and threats of military force against unarmed civilian vessels duly licensed by Guyana to engage in offshore exploratory activities, present its case before the ICJ [International Court of Justice] and, in due course, commit to accepting the Court’s Judgment on the validity of the 1899 Arbitral Award and the location of the land boundary,” Greenidge said.

Guyana has succeeded in having the UN Secretary-General send the more than 50-year old controversy over the 1899 Arbitral Tribunal Award to the ICJ, while maintaining that that award represented a full, final and perfect settlement of the land boundary with Venezuela.

Venezuela has so far refused to recognise the ICJ and has called on Guyana to resume bilateral mediation, a process that Guyana has said has failed for the past five decades. Greenidge said Venezuela has instead sought to stir up sympathies in Latin America.