“I had to practically bully Granger to meet with the teachers”- Jagdeo; GTU General Secretary says “quite disappointed” with pay deal 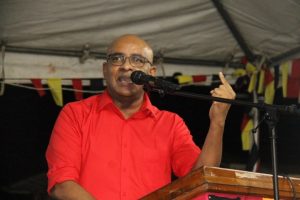 Even as an internal controversy among teachers brews over the pending salary increases, Opposition Leader Bharrat Jagdeo on Saturday claimed credit for pushing President David Granger to meet with the Guyana Teachers’ Union  (GTU) to stave off another strike.

The former Guyanese leader noted that when he was President he had met with teachers and worked out a five-year agreement, while on the other hand, Granger “had his ministers cussing the teachers all the time.” Junior Minister, Keith Scott is on record as apologising to the teachers for labeling them “selfish and uncaring”.

His remarks came hours after outspoken teacher and political activist, Vanessa Kissoon publicly directed a  Facebook post at the GTU General Secretary, Coretta Mc Donald said the union members would first have to approve of the agreement that was jointly announced by the GTU and the Ministry of Education on Friday. “It isn’t what it is until we go through the agreement with a fine teeth comb and approve its signing by our leaders,” Kissoon said.

Saying that teachers feel “sold out” by GTU President, Mark Lyte due to the fact that they had been told that the union would not have accepted less than 20 percent of the 40 percent that had been publicly demanded, Kissoon also wanted to know why a decision was taken on Friday to abort arbitration and accept single digit increases. “How is it an agreement is prepared accepting that many teachers will get no increase and on the increase some will only be paid the difference between what they get and the new percentage,” asked Kissoon.

The GTU General Secretary, herself, was heard in a voice note to teachers saying that “I’m quite disappointed but like everything else, it is what it is”. She explained in that communication that of the 12 percent for  2016 and eight percent for 2018., “what you would have gotten before, that will be deducted so you’ll get the remainder”.

No increase was provided for 2017.

“Some tough decisions had to be made to ensure that every member of the teaching fraternity benefit. We could not have accepted a deal that would see over 8,000 teachers receiving nothing for 2016 and 2017. This new deal will allow for the least of the scale which is a Teacher Aid receiving approximately 100,000 retroactively with the exception of debunching,” the union has also told teachers.

The union has also said teachers would receive two tranches of retroactive increases, the first in December 2018 and the second in January 2019.

The GTU has also said headteachers, deputy headteachers, heads of departments and senior teachers would be eligible for duty free concessions.

The union says it plans to consult its members before compiling and submitting it’s new multi-year proposal from 2019.

The teachers in late August to early September 2018 went on a two-week strike to press demands for a 40 percent salary increase or arbitration. After the Junior Labor Minister had sought to impose a chairman of the arbitration panel, the union had been preparing to resume strike action but that was  avoided when President Granger reopened negotiations last week.