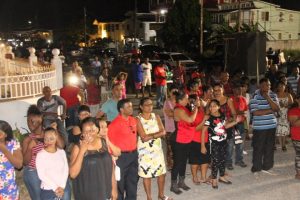 A section of the attendees at the PPP’s Local Government Election campaign meeting.

General Secretary of the People’s Progressive Party, Bharrat Jagdeo Saturday night said next month’s local government elections was a fresh platform to remove the David Granger-led coalition from office because of bad economic management of Guyana.

Jagdeo hoped that the November 12 local government elections would see his party’s candidates 3,000 candidates winning convincingly as the polls are “the beginning of a movement” for the PPP to return to the seat of central government in general elections scheduled for 2020.

In clear reference to APNU and AFC strongholds, he said PPP campaigners were being warmly received now unlike in the past when they had been rejected. “They have seen the true nature of this government, that they’re untrustworthy. They talk about cleaning up corruption. They can’t prove the corruption but they are mired neck-deep in corruption,” he said.

Accusing Granger of presiding over “crappy” policies and a “weak government”, Jagdeo appealed to the estimated 200 attendees to be “part of this change” by turning out to vote in their numbers for the PPP and beat APNU and AFC although new constituencies have since been created and the boundaries of existing ones have been adjusted since the 2016 local elections in which the PPP won 48 of the 71 local authority areas. 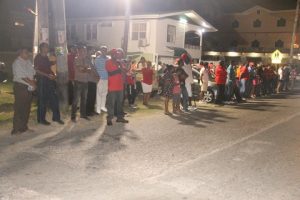 Another section of the gathering at the PPP’s Local Government Election campaign meeting.

“If we thrash them convincingly…If we win them convincingly now-and we can do so and that depends on all of you here tonight- the turnout is important. If we do that, that’s a strong signal as to what will come when the national elections are held and that’s why you have to see this important link, that this is not just about City Hall,” he said.

The PPP General Secretary said the figures show the government’s bleak performance by 200 taxes amounting to GY$60 billion more, no new jobs, a loss of 30,000 jobs, increased land rentals, reduction of retail trade by half,  spending of GY$1 trillion in projects for which there is no evidence of improvement in health, education and crime, reduction in foreign reserves from US$700 million to US$400 million, and increase in local travel and subsistence by GY$750 million annually. “We have not seen any improvement in anything”, he said, adding that “they have sucked out the lifeblood of our country”.

Instead, Jagdeo credited the PPP with bringing ExxonMobil to Guyana and several major infrastructural projects such as the upgrade of the Cheddi Jagan International Airport, the East Bank Road, West Coast Road, East Coast Road and the Georgetown to Diamond bypass.

If the PPP wins a significant support in Georgetown at next month’s local government elections, he said the tax records at City Hall would be computerised, there would be no new taxes, the national procurement act would be used to award contracts, annual audits would be conducted and revenues would be reinvested for the benefit of the citizenry. “You will see a major change at City Hall if the PPP wins here in Georgetown. It’s a tall order but we have to act because we are winners,” he said.

The PPP’s candidates for Georgetown’s constituencies one to five also delivered brief presentations in which they condemned the outgoing City Council, and promised to improve drainage, and accountability and transparency.