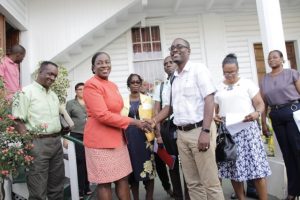 Minister of Education, Nicolette Henry and President of the Guyana Teachers Union, Mark Lyte shake hands at the end of Friday’s negotiations.

Guyanese public school teachers will not get any additional salary increases for 2017 but will receive 12 percent for 2016 and eight percent for 2018, following a final round of talks on Friday, a well-placed source said.

The Ministry of Education and the Guyana Teachers Union, in a joint statement, did not give any details of the deal, but said the proposed arbitration has been called off and the 2016 – 2018 agreement would be signed in the new week.

While no more increases would be granted for 2017, the government added on two percent on its October 8, 2018 offer of 10 percent.

The source said the 2017 payout is “final”, an apparent recanting of government’s position that payout had been deemed “interim”.

“There was an amicable settlement for the matter not to proceed to arbitration”, the two sides said in their statement. “Having considered the new information provided, which included salary benefits for all scales of teachers ranging from TS1 to TS19 and Special and non-salary benefits, the two parties concluded discussions and have committed to the implementation of the agreement

One of the negotiators told Demerara Waves Online News that GY$350 million have been allocated for the adjustment of a number of salary scales, a process widely known as de-bunching. Originally, only GY$200 million had been offered for that process.

At the peak of a two-week strike that had lasted from late August to early September, the union had demanded arbitration after it had failed to pressure government into paying 40 percent salary hike for 2016 and five percent annually until 2020.

After the strike had been called off, the Guyana Teachers’ Union had said that it had been willing to accept a 20 percent increase.

Prior to last week’s latest intervention by the President in the pay dispute to stave off a second strike over Junior Minister of Labour, Keith Scott’s apparent imposition of Professor Leyland Lucas as the chairman of the arbitration panel in violation of an agreement, the union had begun fresh preparations for industrial action.

2018-10-12
Denis Chabrol
Previous: Guyana, Canadian province set to sign oil and gas MoU during 50-member trade mission’s visit
Next: “I had to practically bully Granger to meet with the teachers”- Jagdeo; GTU General Secretary says “quite disappointed” with pay deal