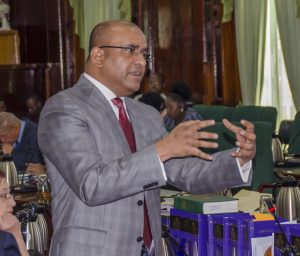 Opposition Leader Bharrat Jagdeo has put the David Granger administration on notice that once his party resumes office, presumably in 2020, they will not only undo some of the 2017 budget measures, but also come against any foreign company operating in Guyana through a non-transparent process.

“[Once] we determine that the assets of GuySuCo or any other company were given away in that manner,” Jagdeo told the National Assembly during his budget 2017 presentation, “we will use whatever means including the tax means when we get back in office to deal with that.”

Jagdeo, in his address, said his party has already set 22 measures which does not as yet include countermeasures to budget 2017.

Jagdeo said his party will reduce the Tributors tax for the mining sector, which was increased in budget 2017, from 20% to 10%. “We will remove the VAT on electricity and water, and put back the Education Grant,” Jagdeo added referring to the $10,000 education grant under the last PPP government.

Turning his attention to proposed amendments to have the Guyana Revenue Authority directly garnish monies owned in VAT from from people’s bank accounts, Jagdeo said: ” we will remove the offensive provisions that are being made in our laws that will capriciously seek to go into people’s bank accounts or restrain them from travelling.”

Further measures proposed by the Opposition Leader include a reduction of the environmental levy, and a restoration of the water and electricity subsidy for pensioners.

The Opposition Leader believes the Government “must be judged on the basis of what they told the people of this country.” He said the government while in opposition “had no intention to fulfill their promises.”

Jagdeo did however commit to support the David Granger administration’s measures which “enhance growth and development in Guyana.” “Anything that will ensure more disposable income for people or that there is greater access to education and health benefits,” Jagdeo added.

“We cannot do otherwise because majority of the things reflected in their programmes are things we left and it would be hypocritical of us not to support our own plans,” the Opposition Leader clarified.

Turning his attention to budget 2017, Jagdeo predicts the budget would create a deficit in the consolidated fund of -$123B compared to -$60B in 2015. “In this budget, he [Finance Minister Winston Jordan] has indicated as though they intend to borrow more to spend more,” Jagdeo continued.

Jagdeo believes the government is outstripping private sector from borrowing from our banking sector. “This is very very dangerous because government is taking bigger shares of savings in the country to finance its deficit.”

The Opposition Leader criticised the government for downplaying how much money the state would earn in VAT even in face of the reduction from 16% to 14% for the 2017 budget. Jagdeo projects money earned from VAT in 2017 will be some $44B compared to $35B in 2016.

Jagdeo’s high-point in the debate was challenge government’s claim of not having the “fiscal space” to avoid the tax-heavy budget. “You are spending twice as much on a [Sussex Street drug] bond to store some condoms than the entire Region 4 health estimates,” Jagdeo objected.

He noted the $170M yearly to rent the controversial Sussex Street bond, which was the subject of debate last evening in the House, is more than the public works budget for Region 6 with more than 100,000 people, greater than the education budget for region 10, and almost as large as the capital budget for Region 8.

In closing his presentation, Jagdeo urged the Government to move away from blaming his party and accept responsibility that it is now in government, calling for the David Granger administration to “move on.”

The PPP benches are empty in the National Assembly in protesting of a break in custom to the speakers’ list where the Opposition Leader was the second to last speaker in the debate, followed by the Finance Minister, who closed the debate since it was his budget being debated.