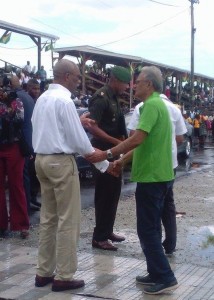 FLASH BACK: President David Granger and Minister of Education, Dr. Rupert Roopnaraine greet each other at D’Urban Park during the Education Month Rally.

The Working Peoples Alliance (WPA) on Thursday came out swinging in favour of its co-leader, Dr. Rupert Roopnaraine who has been criticised for being a board member of a government-backed company that was in charge of the D’Urban Park development project for Guyana’s 50th Independence anniversary celebration.

“The usual partisan band of sanctimonious, duplicitous, dishonest and self-promoting political parties, groups and individuals who vigorously and obsessively give knee-jerk support for serial white collar crimes of all types, are hinting at public malfeasance and misfeasance by Dr. Roopnaraine. In doing so, they shamelessly ignorethat their own behaviours, ethics, and characters, as perceived by the public at large,” said the WPA.

The WPA is a member of A Partnership for National Unity (APNU) which coalesced with the Alliance For Change (AFC) to win the 2015 general and regional elections.

That party’s position came one day after Roopnaraine, who is the Minister of Education, issued a veiled threat of legal action if accusations of malfeasance continue in the media.

The Cabinet Minister said, as a member of the National Commemoration Commission, he had been asked by President David Granger to sit on the board of Homestretch Development Inc without a budget and so had gone out seeking cash and material donations.

The WPA, in offering its “full and unqualified support” to Dr. Roopnaraine regarding the contrived attacks on him regarding and said it was clear that he had fulfilled his mandate. “There is no evidence whatsoever of Dr. Rupert Roopnaraine failing to fulfill his duties as a representative of the Government on the Board of the Company established to initiate these works,” said the party.

WPA expressed confidence that Guyanese would regard those detractors for who they are despite the virtues they preach presently to the public. “They are living embodiments of serial apologists of serial white-collar crimes. And their actions lead to the suspicion that in attacking Dr. Roopnarine and others, at heart they are defending their real self-interest, of sustaining unchallenged, white collar infractions against the public at large.”

Authorities have said the D’Urban Park Development Project had been conceptualised after they had recognised that the National Park would have required extensive repairs and the rugby field would have had to be included. Also,  Minister Patterson had stated that the International Cricket Council had objected to the use of the Providence Stadium for social events , and the fire and police services had expressed  concern about filling the stadium beyond its 15,0oo-seat capacity as had been the case for President Granger’s inauguration.

The Minister of Education has also dismissed suggestions that he has been hiding behind President Granger’s statements on the issue.