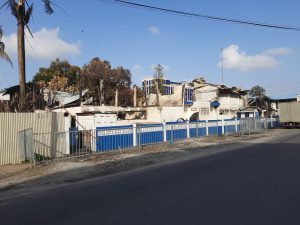 Less than one month after Christ Church Secondary School was destroyed by fire, Minister of Education Priya Manickchand on Tuesday announced that a new building would be constructed even as she accused the opposition of double-standards on free university education.

“The Christ Church Secondary School that was just destroyed by fire…,” she said in listing a number of new secondary schools that would be rebuilt in Georgetown as part of efforts to get Guyana “closer to universal secondary education.”

Ms Manickchand later told Demerara Waves Online News that if the Ministry of Education finds better land space, the building would be constructed there and would retain the same name, Christ Church. Otherwise, she said the school would be rebuilt at Camp and Middle Streets, Georgetown.

The Guyana Fire Service said the fire that destroyed the wooden and concrete Christ Church Secondary School on January 12, 2023 was maliciously set on several chairs.  Classes for the more than 400 students and 39 teachers have since resumed at the Cyril Potter College of Education (CPCE) complex, Turkeyen, Greater Georgetown.

Other schools in Georgetown that would be either completed or commence are the St Rose’s High would be completed St Mary’s Secondary, St George’s Secondary and North Ruimveldt Multilateral School. The St Winifred’s and East Ruimveldt Secondary Schools are to be extended.

Other secondary schools that would be built at Hosororo, Kwebanna, Waramuri and Mabaruma where that building was destroyed by arsonists, Abram Zuil Secondary; two new schools at Tuschen and West Bank Demerara, the Yarrowkabra Secondary, Good Hope Secondary Schools, Orealla, Jawalla, and Karasabai. With World Bank funding, she said all of the multilateral schools would be rehabilitated. Teachers quarters and dorms are being built or expanded.

Touching on free university tuition, she conceded that the People’s Progressive Party Civic (PPPC) introduced fees due to an unspecified “reason” but she noted that the now opposition coalition had increased  tuition fees in 2017 for degrees in education, law, medicine, pharmacy and several other disciplines. “Where were you tears then? How much you loved these university students then?,” she said.

Both the opposition A Partnership for National Unity+Alliance For Change and the incumbent People’s Progressive Party (PPP) had promised in the 2020 election campaign to scrap university tuition fees.

APNU+AFC parliamentarian Amanza Walton-Desir on Monday said she expected the PPP to use the removal of tuition fees as a 2025 election campaign gimmick, but Ms Manickchand on Tuesday said her administration would keep its campaign promise and would so within its current five year term. “We said very clearly that we are going to find a pathway to remove the debt that students had already incurred – former students and current students- and we are going to make the university free in the first five years. Do you know why people are not worried? Because every other promise we made has been fulfilled and so political parties have to stand with some amount of credibility when they speak,” she said.