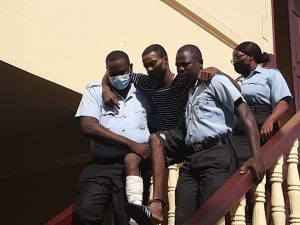 The Nigerian man-who stabbed a presidential guard several times at State House and grabbed another guard’s gun with which he fired several shots-was Thursday arraigned for attempted murder.

He was arraigned for unlawfully and maliciously wounded with intent to commit murder of Constable Telon Perreira and discharging a loaded firearm with intent to maim, disfigure and cause grievous bodily harm.

The charges were laid indictably and so he was not required to plead.

Mr Chimezie was remanded to prison until January 26, 2023 by which time the prosecutor will serve statements on the attempt to commit murder charge.

When asked by the Magistrate what was wrong with his foot, he responded,  “it’s broken.”

The Prosecutor told the court that Mr Chimezie went to the guardroom and told Constable Perreira that he was there to see the President in keeping with an appointment. After he was told to have a seat, the prosecution’s case was that he became agitated a few minutes later, and tried to go past the gate. When Mr Perreira blocked the accused from passing,  he allegedly took out a knife from his bag and stabbed Mr Perreira. A scuffle ensued and when a female presidential guard,Constable Roberts, intervened, he took away her handgun.

The prosecutor added that when Constable Cummings went to render assistance to Constables Perreira and Roberts, Mr Chimezie discharged three rounds in his direction from the service revolver and then began running on Carmichael Street.

The court was also told that Constable Cummings chased Mr Chimezie, discharged a round in his direction and a bullet struck him in his leg.

The service revolver was retrieved from him, the court was also told.

Clad in a black and white striped jersey, black short pants and a pair of slippers, he sat in the dock, elbows on knees and head down for some time as he awaited the case to be called.

Mr. Chimezie on December 15, 2022 turned up at the State House guard room, asking to see President Irfaan Ali who was at home with his family at the time.

After Mr. Chimezie regained consciousness, he was questioned by investigators and also underwent a psychiatric evaluation.

He was discharged from the Georgetown Public Hospital on Monday.

Mr.Chimezie arrived at the Georgetown Magistrates’ Court under tight security. His right leg was still bandaged and his face and head are scarred presumably from gunshot injuries.

A severely limping Chimezie was assisted out of the prisoners van by two policemen. He was the lone occupant. Another accompanying policeman was armed with an assault rifle.

Mr.Chimezie was shortly before his court appearance lifted upstairs into the courtroom and placed in the prisoners dock.

His wife sat in the courtroom and took notes of the proceedings. 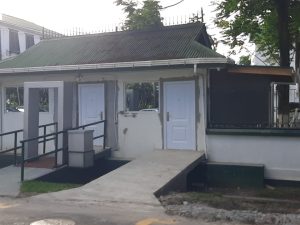 The State House guatdroom and reception area being modified.

Meanwhile, at State House, the guard room and visitors reception area was being extended and reconfigured.

President Irfaan Ali became incensed earlier this week when the incident was described as “confusion.”

Both the government- including the President, Home Affairs Minister Robeson Benn and the Police Force- have opted to say very little about the status of the investigations.

Guyana has asked INTERPOL for a complete background check on Chimezie.

Opposition Leader Aubrey Norton on Thursday criticised government for being tight-lipped about the incident. He said government should publicized a report on the investigations, rather than issuing thinly veiled suggestions of opposition involvement.

The opposition condemned the attack on the day it occurred.