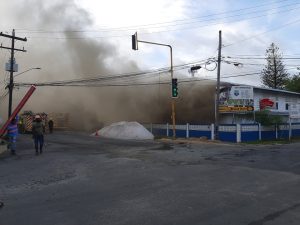 The fire at Christ Church Secondary School in its early stage on Thursday, January 12, 2022.

A suspect has been identified in the burning down of the Christ Church Secondary School on Camp and Middle Street, a senior police officer said Tuesday.

“Investigators are pursuing a male suspect who was seen at the school prior to the building being burnt,” the high ranking police officer told Demerara Waves Online News.

The suspect, according police, was not connected to any staff member at the school whose student population was 502 and had 39 teachers.

The Guyana Fire and Rescue Service on Monday said the fire was “maliciously” set by a person or persons unknown and that the blaze originated from a number of seats in the wooden and concrete school building.

Fire Service investigators concluded that the fire was arson because the first fire eight days before started at about 4:29 PM  and the second one was at 17:22 PM, the chemicals were removed from the laboratory after the first fire and the building was rewired and certified by the Government Electrical Inspector.

The Fire Service said the Christ Church Secondary School became engulfed in flames as fire fighters were “getting into action.”

Over the past two and half years, fires have destroyed a major section of the North Ruimveldt Multilateral School, St George’s Secondary School and the Mabaruma Secondary School. Investigators have not determined the cause of the North Ruimveldt Multilateral fire, but have concluded that the blaze at St George’s was electrical and the one at Mabaruma was arson.