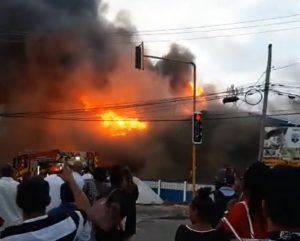 The more than 500 students, who attended the now destroyed Christ Church Secondary School on Camp and Middle Streets, Georgetown are to be relocated from next week Monday, and already the Ministry of Education is consulting the Caribbean Examinations Council (CXC) about options for students whose records have been destroyed, officials said at the fire scene.

“We are talking to CXC, we have gotten a couple of options and want to examine what will be in the best interest of these children,” Minister of Education, Priya Manickchand said when asked by Demerara Waves Online News at the fire scene. She said the the students would be consulted and provided the options and “let’s see how we can cross this together.”

The fire started shortly after 5 PM, Thursday, January 11, 2022 and firefighters from various stations across Georgetown responded. They were backed up by Emergency Medical Technicians, Guyana Power and Light technicians and police. The fire, aided by a steady north-east wind, quickly crawled through the decades-old wooden and concrete building.

The raging inferno occurred about one week after a smaller fire at that school’s laboratory, prompting authorities to remove all the chemicals there. “It is very strange that all of a sudden it becomes very combustible,” he said. Education Minister Manickchand  later added that the building was rewired and certified.

The Minister of Education said CXC has been asked to explore the options that are available to students, whose School Based Assessments (SBAs) or lab books have been destroyed by the blaze, to be in the best position possible for their examinations in a few months time.

Ms Manickchand urged the Christ Church Secondary School students to surmount this difficult period and work towards success. “To the students of Christ Church, let’s stand together. This is your chance to show the world, to show everyone that a fire is not going to stop you,” she said. Ms Manickchand advised the Fourth and Fifth Form students to “put your heads down for  the next few months… concentrate on your work and let us rise up from this together.”