Benn, Manickchand urge Guyanese to guard against fires at schools 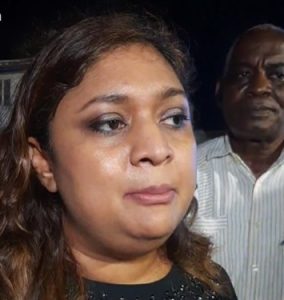 Home Affairs Minister Robeson Benn and Minister of Education Priya Manickchand on Thursday evening stopped short of casting blame on anyone for the fire that destroyed the Christ Church Secondary School in Georgetown, opting instead to urge Guyanese to be vigilant against those who might be targeting schools.

“Primarily, it requires the communities, the parents, each and everyone and the media to put out the message to protect the nation’s assets every time and particularly the future and education of children,” he said.

Mr Benn said police  were working on information about who might be responsible for the blaze that started just after 5 PM Thursday, 12th January, 2022. Without going into details, he hinted that the fire might have been deliberately set. “It would appear passing strange and it would test probability that within two or three weeks, we can have a fire at the same building at a prominent location in Georgetown where hundreds of children are working on their SBAs (School-Based Assessments) and other things,” he said;

He encouraged parents, teachers and media across Guyana to stand in support of the education system and to “watch out” for those assets as Guyana could not afford  to lose them and the opportunities being given to children to be educated.

Education Minister Manickchand said two recent fires have caused the Ministry of Education to be “stretched for space.” Indicating that she was not pointing to the cause of the fire, she said Guyanese must be mindful about “wildcards making wild statements” because Guyanese of all persuasions and backgrounds are affected by fires at schools. “When schools burn, children of all colour, of all religions, whose parents vote all over for everybody; male, female, everybody suffers and so we have to collectively take a stand in this country that we will not let careless speech, we will not let careless persons interfere with our children’s future,” she added.

The Ministry of Education promised to provide support such as material and psycho-social support to students.