‘We’re fed up of hearing that a Judicial Service Commission will be appointed’- Chancellor; AG assures appointment within 3 months 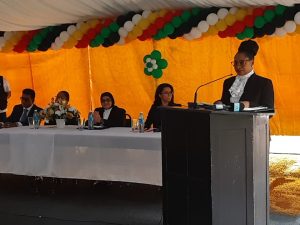 Guyana’s Chancellor of the Judiciary Yonette Cummings Edwards on Tuesday said the judiciary was tired of repeated promises that government would appoint a Judicial Service Commission (JSC) because the few remaining judges are faced with an increasing workload.

“We need more judges. We need the Judicial Service Commission to be established ASAP (as soon as possible). We are facing increased caseloads. Judges are now overburdened, they are exhausted , they are nearly worn out and they are, in some cases, burned out,” she said. Justice Cummings added that psychologists have provided psycho-social therapy but that in itself could not address the impact of fewer judges.

The JSC has not been reconstituted since 2017, despite commitments by President Irfaan Ali and Attorney General Anil Nandlall in recent months. Constitutionally, the JSC is composed of the Chancellor, Chief Justice, Chairman of the Public Service Commission (PSC) and such other members as may be appointed.

While the judiciary is willing to provide judgements in a timely manner, Chief Justice Roxane George-Wiltshire noted that Guyana has three Court of Appeal judges and 11 High Court judges with another High Court judge soon to retire.  The Director of Public Prosecutions, Shalimar Ali-Hack said 308 cases are listed to be heard by three judges in the Demerara Assizes. She said one of the three judges would be sitting in the Sexual Offences Court where there are 134 cases listed and the remaining 174 cases are listed to be heard by two judges. She elaborated that 174 cases include 61 cases for the offence of murder, 24 cases for manslaughter and 79 cases for attempted murder.  The DPP also added her voice to the call for more judges to allow for the disposal of an increasing number of cases in a “timelier” manner.

Chancellor Edwards’ appeal was issued after Attorney General Anil Nandlall sought to assure the judiciary that the JSC would be appointed very early in the first quarter of 2023. Speaking at the inaugural Law Year held in the High Court’s forecourt, he also announced that key support staff for the judiciary would be appointed as the PSC would soon be constituted.

The recent retirement of Justices Frank Holder and Brassington Reynolds has put added strain on the already taxed judiciary, triggering unvarnished calls for more judges. “We do not need the rhetoric. We need more labourers. We need the judges. We’ve been hearing time and again about the JSC is soon to be established. We would like to see the implementation and the establishment of the Judicial Service Commission,” the Chancellor of the Judiciary said.

Chief Justice Roxane George-Wiltshire, directing her comments to the Attorney General, expressed appreciation for the government’s provision of buildings as they are necessary as part of improvements to the court plan. She was quick to point out that “buildings do not serve people or provide justice. People do!” She said the soon to be published Judicial Strategic Plan is expected to state that “adequately compensated human resources has been identified as a key component for the development of an effective and efficient judicial administration.”

The Chief Justice said the judiciary was doing its best in the face of an “extremely heavy caseload” among other challenges. She said on average a civil judge would see a constant docket of 200 to 400 cases at any one time throughout the year, managing cases for the counties of Demerara, Berbice and Essequibo. Justice Wiltshire-George said a number of civil cases has to be assigned to judges who are assigned to the criminal session so as to assist with the civil caseload. Also, she said the two Commissioners of Title carry a caseload in the thousands for all three counties.

“The criminal case load in the High Court is extremely high,” she said, adding that the court system merely receives cases and has no control over the number of matters filed. Additionally, she said all High Court judges sit at an appellate level to hear Full Court appeals from decisions of a single judge and the Magistrates’ court.

President of the Guyana Bar Association (GBA), Attorney-at-Law Pauline Chase says the the High Court and the Court of Appeal are without the full number of judges due to the absence of the JSC, which appoints judges. That, she said, “severely undermines the administration of justice. “We at the Bar are acutely aware of the pressure this is placing on the system,” she said. Ms Chase described the work of the judges as a “herculean task in supporting the system from buckling.”

The Chief Justice said the few judges have decided to increasingly give oral judgements in order to cope with the high case load. She explained that those oral judgements would be reduced to transcripts of the recordings of the decisions. “The days of lengthy written judgements or memoranda of reasons can no longer be maintained for all cases,” she said. In her own practice, she said that recently in the interest of time, she sent the audio recording of an oral judgement that she gave in a virtual hearing to  Counsel.