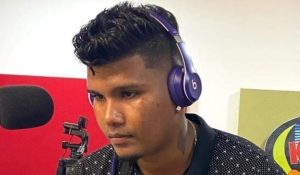 Police on Monday said they arrested a suspect in connection with the chopping to death of a Disc Jockey (DJ) at Laluni Village, Soesdyke-Linden Highway as he tried to prevent his father-in-law from being attacked by several persons.

The Guyana Police Force indicated that they are on the manhunt for two other “identifiable” persons in connection with the killing of Brian Pitam who lobed ay 441 Good Hope, East Coast Demerara.
Investigators said at about 9 O’clock Sunday night, January 8, 2023 Pitam was chopped to his  left thumb,  his index finger and middle fingers were severed, the left wrist was partly severed and there was a deep chop wound to the back of the neck.
Police were told that Pitam and his father-in-law Kumar Bacchus,51,  who was a truck driver were at a shop at Laluni where they were imbibing.
“The three suspects confronted Kumar Bacchus and dealt him a lash to his face. Brian Pitam then intervened and was dealt several chops about his body. The trio then rode off on their motorcycles in an unknown direction,” investigators said.
Pitam was reportedly picked up by public spirited citizens and rushed to the Georgetown Public Hospital Corporation where he was pronounced dead on arrival.