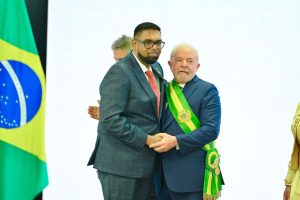 President Irfaan Ali on Sunday condemned the unrest in Brazil that saw thousands of persons storm the Congress and Supreme Court as well as encircled the presidential palace, just days after leftist President, Luis Inacio ‘Lula’ Da Silva was sworn in.

“We condemn every attempt and attack against the Presidency and democratic institutions of Brazil. Those who utilize violence to subvert democracy must be brought swiftly to Justice.

We call on all stakeholders to be responsible and not be part of this unacceptable behavior. Guyana stands with the law-abiding people of Brazil and the institutions of the state in defense of democracy,” he said while in India for a wide-ranging visit. He stayed clear of casting blame on any politician or his or her supporters for the unrest.

And Leaders of the 15-nation Caribbean Community (CARICOM) of which Guyana is a member also condemned the unrest by those who refused to respect the democratic will of Brazilians.

“The Caribbean Community (CARICOM) strongly condemns the violent invasion of government buildings that occurred in Brasilia today by a misguided mob refusing to accept the results of free and fair democratic elections.

Those involved should be held to account. We welcome the quick restoration of order.

CARICOM reaffirms its unwavering commitment to democracy and the rule of law,” said CARICOM whose independent member states are also members of the Organisation of American States (OAS).

While former far-right President, Jair Bolsonaro has denied fomenting the unrest, observers have reflected on his stance before last year’s general elections in which he had raised the spectre of clinging on to power by already claiming that the voting machines had been already manipulated against him.

The United States’ National Public Radio (NPR) reported that supporters of former Brazilian President Jair Bolsonaro stormed Congress and other buildings in the capital of Brasília on Sunday, calling for the military to take over Brazil’s government.

By evening, security forces had retaken control of the breached buildings, said Flávio Dino, the minister of justice and public security. Dino said about 200 people had been arrested, while the district’s governor said more than 400 had been arrested.

Many Bolsonaro supporters have refused to accept the far-right former leader’s defeat in elections more than two months ago to the leftist Luiz Inácio Lula da Silva, who was sworn in as president a week ago.

In addition to the Congress building, videos and photos of the scenes posted to social media also showed crowds invading and ransacking the nearby presidential palace and Supreme Court. Swarms of Bolsonaro supporters, known as “Bolsonaristas,” were seen charging past security barriers and clashing with police who appeared to be using pepper spray against them.

Congressional offices were closed as the mob moved up the ramp of the Congress building and climbed on the roof and broke windows.

Some of the crowd, many draped in the Brazilian national flag or its colors, looked to be recording the invasion on their phones.

President da Silva, who was away in São Paulo state, called the storming an act of “barbarism” by a mob of “fascists.”

“Whoever did this will be found and punished,” he wrote on Twitter. “Democracy guarantees the right to free expression, but it also requires people to respect institutions. There is no precedent in the history of the country what they did today. For that they must be punished.”

He also blamed a lack of security for the events. In a news conference following the attack, da Silva announced his appointment of a new head of security in the federal district, who will be reporting directly to him.

Dino said the federal government sent reinforcements, in addition to the available forces he said were already at work.

“This absurd attempt” to impose their will by force will not prevail, he said in a tweet earlier in the day.

Since da Silva’s narrow defeat of Bolsonaro in October, Bolsonaro supporters have been protesting the win by camping out in front of army barracks around the country, blocking roads, and calling for armed forces to intervene and overturn the election.

Bolsonaro, a populist in the mold of former U.S. President Donald Trump, has sown doubts about the legitimacy of the election, and has refused to concede defeat.

Tweeting on Sunday evening, Bolsonaro criticized the riots, writing that peaceful demonstrations are part of democracy, but that “depredations and invasions of public buildings” are not. He also rejected da Silva’s comments that he bore some responsibility for the attack, saying those claims lacked evidence.

The scenes mirrored that of the Jan. 6, 2021 invasion of the U.S. Capitol, coming just two days after the second anniversary.

The incoming administration had previously downplayed fears of a Jan. 6-style insurrection in Brazil ahead of da Silva’s inauguration, which convened without incident.